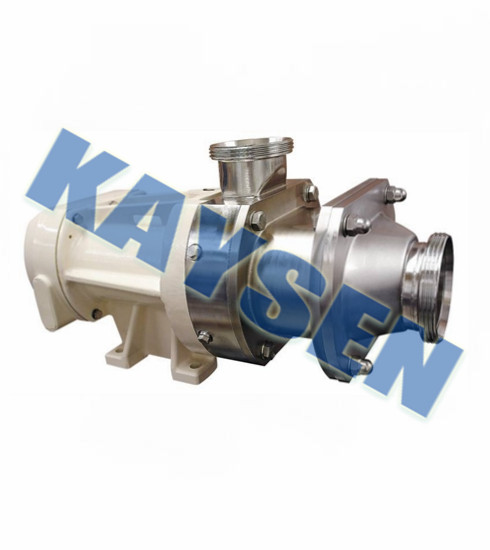 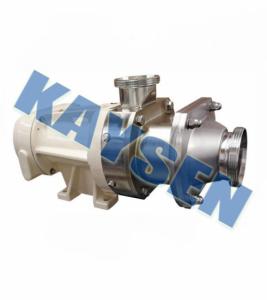 The three-screw pump is formed by the pump body and the screw. When the driving screw rotates, the driven screw that meshes with it is rotated together, and the screw meshing space volume at one end of the suction chamber is gradually increased, and the pressure is lowered.

The liquid enters the volume of the meshing space under the pressure difference. When the volume is increased to a maximum to form a sealed chamber, the liquid is continuously moved axially in the sealed chambers until one end of the chamber. At this time, the volume of the screw meshing space at one end of the discharge chamber is gradually reduced, and the liquid is discharged. The working principle of the three-screw pump is similar to that of a gear pump, except that the gear is replaced by a screw in the structure. The table shows the characteristics and application range of various screw pumps. The three-screw pump has small flow and pressure pulses, low noise and vibration, and self-priming capability, but screw processing is difficult. The pump has a single suction type and a double suction type, but the single screw pump has only a single suction type. The three-screw pump must be equipped with a safety valve (the single-screw pump does not have to be equipped with a belt) to prevent the pump or prime mover from being damaged due to some reason such as the discharge pipe being blocked and the pump outlet pressure exceeding the allowable value.

The three-screw pump uses the rotation of the screw to suck and drain the liquid. The intermediate screw is an active screw, which is driven by the prime mover, and the screw on both sides is a driven screw, which rotates in reverse with the active screw. The threads of the main and driven screws are double-ended threads.

The three screw pump is a screw type positive displacement pump. In the three-screw pump, since the main screw and the spiral groove on the driven screw are engaged with each other and they cooperate with the inner surface of the three holes of the bushing, a plurality of dynamic sealing chambers are formed between the inlet and the outlet of the pump, and these dynamic seals are formed. The chamber will continuously move the liquid axially from the pump inlet to the pump outlet and boost the delivered liquid step by step. Thereby forming a continuous, smooth, axially moving pressure liquid. The liquid conveyed by the three-screw pump is a lubricating liquid containing no solid particles, no corrosive oil and similar oil, and the viscosity is 1.2~100oE (3.0~760cst). The high viscosity liquid can also be transported by heating and viscosity reduction. Not more than 150oC.

The sealing surface between the screw and the housing is a spatial curved surface. There is a non-sealed area such as ab or de on this curved surface, and a plurality of triangular notches abc, def are formed with the groove portion of the screw. These triangular notches form a passage for the liquid, allowing the active screw groove A to communicate with the grooves B, C on the driven screw. The grooves B and C are wound along their own spirals to the back, and communicate with the grooves D and E on the back, respectively. Since the groove D, E and the groove F (which belongs to the other head spiral) are joined to each other with a triangular notch a'b'c' similar to the front surface, D, F, and E will also communicate. In this way, the groove ABCDEA also constitutes a "∞"-shaped sealing space (if a single-head thread is used, the groove will be screwed in the axial direction, and the suction and discharge ports will pass through, failing to form a seal). It is not difficult to imagine that on such a screw, a plurality of independent "∞"-shaped sealed spaces will be formed, each of which occupies an axial length exactly equal to the lead t of the tired rod. Therefore, in order to separate the screw suction and discharge ports, the length of the threaded section of the screw is at least greater than one guide. 位于Schw?bischGmünd的凯森Kaysen泵业有限公司是*的各种流体水泵和隔膜泵制造商之一。60多年来，凯森以“制造”的可靠性和质量达到了*标准。凭借我们全面的产品组合，我们支持世界各地的客户成功掌握供水，采矿，工业，化工，造纸，电力，食品，制药，污水和海上行业的苛刻抽水任务。作为上述领域创新技术的*供应商，我们是液体需要安全，高效和经济运输的*合作伙伴。        凯森始终坚持“重质量，讲信誉”为宗旨。产品现畅销全国各地，并已逐步开发海外市场。公司多次被评为“重合同讲信用”企业，深得用户的信赖和广泛的赞誉。        The Kaysen Pumps GmbH in Schw?bischGmünd, Germany, is one of the world's leading manufacturers of fluid centrifugal pumps and diaphragm pumps. For more than 60 years, Kaisen has achieved the highest standards of reliability and quality of "Made in Germany". With our comprehensive product portfolio, we support customers around the world to successfully grasp the harsh pumping tasks of water supply, mining, industry, chemical, paper, electricity, food, pharmaceutical, sewage and marine industries. As a leading provider of innovative technology in these areas, we are the perfect partner for liquids to be safe, efficient and economical to transport. ,
Germany Kaysen always adhere to the "quality, stresses credibility" for the purpose. Products are selling all over the country, and has gradually developed overseas markets. The company has repeatedly been rated as "the contract with the letter" business, won the trust of users and extensive praise.